Following our successful Kickstarter campaign we are delighted to announce our new CD, Manhattan to Montmartre, on the prestigious SOMM label, to be released in Summer 2021. The exciting programme features four masterpieces by Gershwin and Bernstein, with premier recordings of Julian’s transcriptions of An American in Paris and the Second Rhapsody. 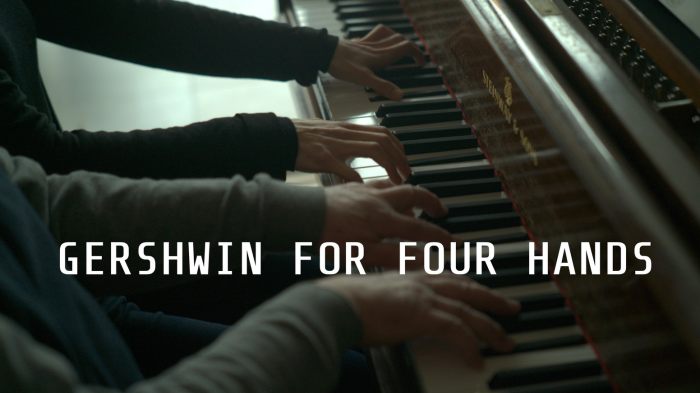 Please click here for a promotional video for the CD.

“It came as balm to the soul to encounter some real, sensitive music-making…the tumultuous ending [Gershwin’s Second Rhapsody] would have brought the house down in a properly packed venue – which is surely what the piece deserves.”
(Telegraph Online)

[Gershwin/Jacobson 2nd Rhapsody]: “It is a major addition to the four-hand repertoire.” [Mariko Brown ‘Travels Through a Mist of Chinese Mountains’]: “…as atmospheric as a shansui watercolour, clear-textured, inventive in its use of the instrument, and retaining a sense of mystery despite its range of moods.”
(International Piano Magazine)

“They played, thought and matched each other throughout in musical understanding, beauty of sound and speed of reaction. We felt privileged to hear them.”
(Chairman, Portsmouth Music Club)

“After the interval came Dances, Oracles, Mystery, performed to a series of pieces by Debussy, ravishingly played by Julian Jacobson and Mariko Brown.”
(Oxford Times)

Formed in 2011, the piano duo of Julian Jacobson and Mariko Brown is now established as an ensemble of rare distinction, vitality and originality. Performances in London include St John’s Smith Square, Fairfield Hall, Blackheath Hall, Royal Academy of Music, Markson’s Bösendorfer series and Clapham Omnibus. The duo has been featured in the Lower Machen and Stow-in-the-Wold Festivals, at Manchester Art Gallery, Royal Birmingham Conservatoire, Chetham’s School of Music and many other venues. Abroad they have appeared regularly in France including their Paris debut in November 2018, and twice at the Madeira PianoFest. They have given three highly acclaimed concerts at the Southbank Purcell Room, in 2014, 2015 and 2019.

Their first recording was a CD of the music of Julian’s father Maurice Jacobson for the Naxos/British Music Society label. In 2017 they released their first CD on the SOMM label, pairing Busoni’s towering masterpiece the Fantasia contrappuntistica (easily the most compelling account I have ever heard – Musical Opinion) with a collection of rare French, Italian and English works including premiere recordings of the duet version of Debussy’s neglected ballet score Khamma and Anthony Herschel Hill’s Nocturne for two pianos. The CD received outstanding reviews and will be followed this year by the duo’s second CD for SOMM with music by Gershwin and Bernstein.

With a repertoire firmly centred on the great classics for piano duo repertoire, they have also continually sought out new and neglected repertoire. At the Purcell Room they gave the first performance of the piano duet version of Gary Carpenter’s After Braque in 2014 and of Nathan Williamson’s Instinctive Ritual (composed for the duo) in 2015. In 2016, in Manchester Art Gallery, the duo premiered Edward Lambert’s Aspects of Work, written for them and inspired by Ford Madox Brown’s painting Work which is part of the gallery’s permanent collection. Recently they have premiered Julian’s virtuoso concert transcriptions of two Gershwin masterpieces, the Second Rhapsody and An American in Paris, both published by Schott/Bardic Edition, with many subsequent performances.

Julian Jacobson studied piano and composition from the age of seven with Lamar Crowson and Arthur Benjamin, subsequently studying at the Royal College of Music, Queen’s College Oxford and privately with the great Hungarian pianist Louis Kentner. He enjoys an international career as soloist, chamber musician with many prominent artists, and teacher, appearing in over 40 countries and making regular visits in recent years to the Far East. He has been soloist with several of the principal British orchestras under conductors such as Sir Simon Rattle, Jane Glover and Tamás Vásáry, as well as appearing in most of the leading UK festivals. He has been particularly acclaimed for his performances of the Beethoven Sonatas, of which he has given eight complete cycles, most recently at The Forge, Camden Town (2011-12). In 2003 he performed the entire cycle in a single day in aid of the charity WaterAid, an event which attracted worldwide media coverage: he repeated the “marathon” in 2004 and 2013 and is planning a further performance in November 2022. He has recorded for Meridian, Hyperion, Chandos, Decca Argo, Continuum and other labels. Julian Jacobson is a Professor at the Royal College of Music and Royal Birmingham Conservatoire, and also Guest Professor at Xiamen University, China.

Anglo-Japanese Mariko Brown began her piano studies with Martyn Dyke, with whom she performed regularly including at the Fairfield Halls, Croydon, as well as for many outreach community projects. She made her first concerto appearance age nine under Dr.Ruth Gipps, subsequently going on to study at the Guildhall School Junior Department with Professor Joan Havill where she won the prestigious Lutine Prize. This led to concerto appearances at the Barbican Hall and St.Giles Cripplegate as part of the City of London Festival. During this time she also took up composition with Gary Carpenter, receiving a prize for her Oboe Sonata. She was awarded the Principal’s Prize on graduation from the Junior department and went on to continue her studies at the Senior Department, with both teachers and also Simon Bainbridge, graduating in 2000. Her Piano Sonata, commissioned and performed by Helen Reid, in 2004, was premiered at Bridgewater Hall, Manchester. She has also been Musical Director for productions at the Arcola Theatre, London and Eye Theatre in Suffolk. Enjoying a varied musical life, Mariko has also been for many years a dedicated teacher, including at Junior Guildhall and currently at the Yehudi Menuhin School.

Mariko performed the Grieg Piano Concerto in 2016 and 2017 with the Amati Orchestra and LRO and Gershwin’s Rhapsody in Blue with the Sutton Symphony Orchestra in 2018.